The Legacy Of Jalon Brown 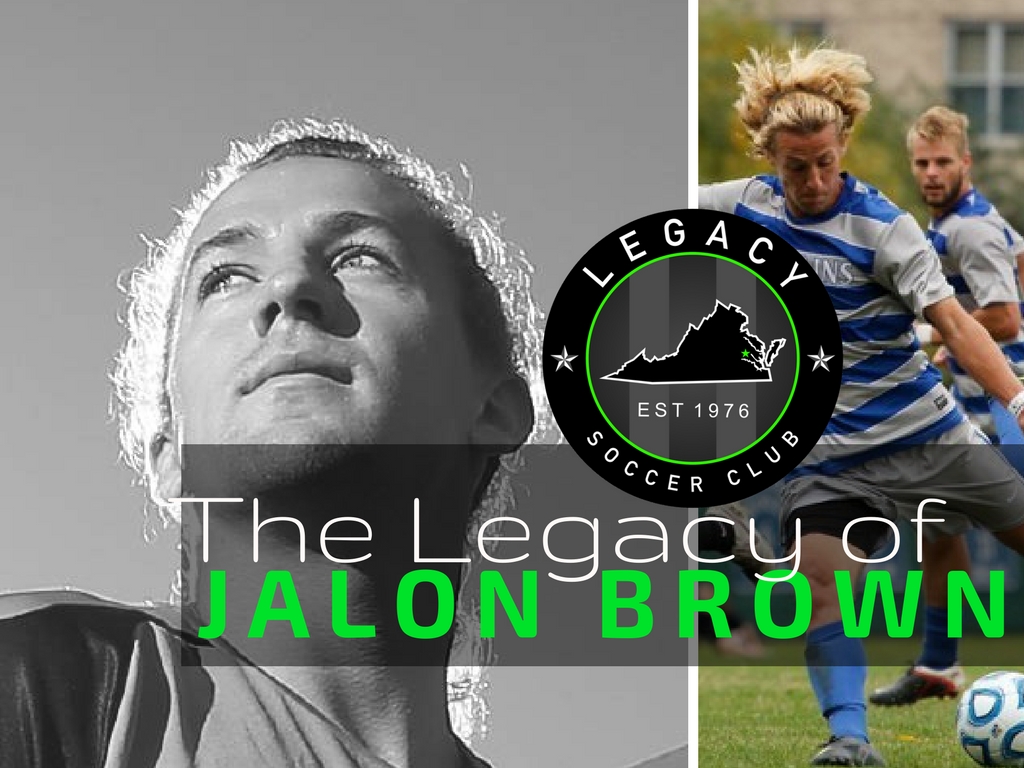 Recently, Legacy Alumni Jalon Brown announced his retirement following his impressive run in Australia.  Brown most notably finished his 2017 campaign by being named “NNSWF Player of the Year.”  The NNSWF stands for Northern New South Wales Football, which is a division of the second Tier in Australia’s professional structure. Brown, decided to abruptly end his short tenure with Valentine FC (Valentine Australia) and his professional career after tearing his hamstring towards the end of the season.

Brown found himself in Australia after being encouraged by former Legacy/CNU Alumni Alec Faulkner to join him on a journey across the world. Faulkner has plans to stay in Australia and continue to represent the states abroad while Brown returns home.

Read the complete article about the end of this miraculous season for our two alumni, Brown and Faulkner, by clicking here.

Jalon Brown still holds the record for goals and points in a single season at Christopher Newport University.  Now, with the addition of the “NNSWF Player of the Year award,” Brown is safely enshrined in the Virginia Legacy Hall of Fame.

Following his announcement, Jalon took a minute to speak to the staff at the Virginia Legacy and answer a few open-ended questions. Brown, a former player for the club, speaks from the heart about his path and his memories that led him to the honors he’s achieved.

What’s your best memory of the season?

“My favorite memory from the season is difficult because it was such a new experience that I enjoyed a lot of moments! If I had to choose I would probably say my favorite memory was on my birthday, our game vs. Maitland. We won 4-0 and it was an all around dominating performance from Valentine. I had 2 goals (both with my right foot I might add) and we had another really good goal, we scored a penalty, and I can't even remember a single good chance that Maitland had. That game actually put us in first place in the league at the end of that weekend which was cool! All of that on my birthday as well so it was really a great weekend!”

“I think the biggest thing is adapting to the style of play in another country. Every place is different and before you can really begin to play well you have to understand the way your teammates and opponents play. Australia specifically tends to be more physical and tougher so that was something that was difficult to get used to. Especially because here, I played as a center forward so I was always defended by the big center backs which meant I was constantly getting bumped, hit, tackled, and everything else.”

What’s the largest sacrifice you’ve made to get to where you are?

“The biggest sacrifice I made was probably quitting my job. I had a full time job working as a software developer for Booz Allen Hamilton up in Washington DC when I got a message from Alec about the opportunity to come to Australia. At that point I had a really tough decision because at the time, my situation was a really good opportunity for me. I was making good money, getting experience in the work force at a great company and surrounded by some of my best friends. So I had to decide between advancing my career and knowing that I had that security or going all the way across the world to a place where I knew 1 person to pursue an extremely lucrative dream with no real guarantees that anything would work out. Needless to say it was a pretty big risk but it was a dream of mine that I convinced myself I could achieve and luckily it worked out!”

Is there anything you would have done differently in your career?

“If I went back and did it again I think the most important thing I could do differently would be to take my growth as a player much more seriously, earlier. You don't realize it when you're young but even in your teens you can take serious steps towards becoming a professional player. When you look at the best players in the world, they all were taking their game very seriously in their upper teens.  Some were even playing professionally at that age! So I think if I had been more serious about training myself physically and mentally that would have made a big difference in my opportunities back in the USA. I should point out that I did the workouts and technical trainings and everything at that age but I never really took them too seriously and the important thing there is that I wasn't training with a purpose. Whenever someone trains, it should be to work towards goals and to make progress in your unique abilities rather than just doing things because that's what people tell you will make you better. Being intentional about your success is the most important thing you can do and starting that at a young age makes you drastically more likely to get noticed by scouts and professional teams.”

Any words of encouragement to the Legacy players who wish to follow in your footsteps?

“I think that my story throughout my time with Legacy and on to college and then here now is a pretty interesting one because I was sort of a late bloomer in many ways. When I was younger I think I was considered one of the worse players on my legacy team. I didn't play much, didn't start any games and didn't ever think I was very good but it didn't matter because I loved the game. That was until maybe my junior year of high school when the coaches started to see some potential in me and I finally started to have some success. So because I went from being one of the worst on my team as a kid to now having just gotten player of the year in a professional league in a different country I'd say I'm living proof of the fact that if you're passionate about something, you can absolutely find a way to achieve your goals. Along the way you will have people that don't see your potential or don't think you have what it takes, and that's ok because that's part of growing as a person and a player. I had plenty of coaches and friends and teammates who didn't think I was good enough but I love this game and it didn't matter what they said because I was so passionate about it that even when I was playing badly I couldn't help but still want to play, train, watch, do everything related to soccer, I never lost my love for this game. So my words of advice to anyone that looks to me as an example would be to stay passionate about the game, live and breathe soccer, go to the tournaments, watch it on TV, go to local college games and local professional games, play in your backyard or at the park near your house, maybe even play sometimes in your house or your garage! (Sorry parents) Do everything you can for the love of the game and your opportunities will present themselves to you.”

Congratulations Jalon on a extraordinary career and from everyone at the Virginia Legacy, we are proud of you!